VC Elite traveled to Garden Grove to play in the annual SGV Aloha tournament last weekend.  It was one of the tournaments we had circled on our schedule because of the high level of competition we knew would be there.  Our teams rose to the occasion and definitely made there presents known.
The 6th graders won their fourth tournament in a row.  Their thrilling double overtime victory over Cal Storm may have been the highlight of the entire Aloha tournament.  The team was trailing almost the entire game but was able to force a first overtime with a timely steal and clutch free throw shooting.  Clutch rebounding and a couple big shots by VC Elite got them into the second overtime where they finally put the game away.  Awesome tournament girls!  Time for a little rest. Scroll down for results of all teams. 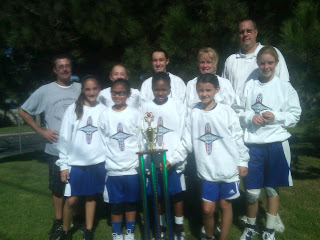 The 5th graders finished in third place and got an up close look at two of the top teams in Southern California; the Torrance Northstars and the Aikanes White.  The girls were able to keep it close against the Northstars and were only down 4 points with 6 minutes to play.  Unfortunately that is as close as they could get but it was still an amazing performance for this team.  They finished with a 2 and 2 record.  Way to play hard girls!
The 7th grade girls also faced tough competition.  They lost both games on Saturday to two very good teams; the Brea LadyCats and OC Rhythm, both games were close and even in a losing effort the 7th graders were improving and developing that all important team chemistry.  They demonstrated just how much they have improved on Sunday winning both games over the Torrance Northstars and the Triple S Warriors.  When this team gets on a run it's fun to watch!
In the 8th grade division the highlight of the entire tournament may have been the game late Saturday night between our 8th grade team and Swift Orange.  In front of a big crowd VC Elite erased an 11 point deficit and then hit a three pointer from just inside the hash mark as the buzzer sounded to force overtime.  Unfortunately they could not pull it off in overtime and Swift Orange went on to win the championship.  That shows you just how close this team was.
Overall the club went 9 and 7.  We are all very happy with the performance but know there is still work to be done.