The VC Elite 6th graders won the championship of the Lights Out Fall Frenzy at Birmingham High School in Van Nuys last weekend.  They won in thrilling fashion scoring 4 points in the final 5 seconds of overtime against a very strong Winnetka team.  They posted victories against Lights Out and ARC on their way to the championship game.  Way to go girls!  That's 3 in a row!  Smile coaches.  Scroll down for results of all teams. 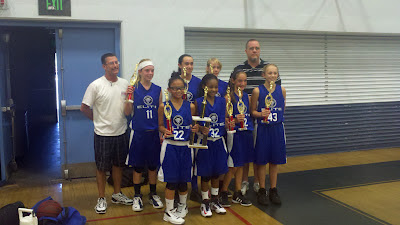 ﻿
The VC Elite 5th graders also played in the championship game but lost a very tight battle to Winnetka in the final minutes of the game.  To get to the championship game the 5th graders posted victories over No Dribble and American Eagles.  This team is great to watch because they play with so much heart and hustle.  Keep up the hard work girls!
The VC Elite 7th and 8th graders both went 1 and 2.  Both teams were competitive in every game in very tough divisions.  I expect these two teams to be ready for next weeks SGV tournament.
Overall the club went 7 and 5 and looks ready for the challenge next weekend in Anaheim.