The entire club traveled to the campus of UCSB last weekend to play in the Ventura Heat/Swoosh basketball tournament.  All the games were played in the Thunderdome and gave our teams a chance to watch and support each other.  The effort every player put forth was amazing and the hard work we have all put in the last four weeks definitely paid off. (scroll down for results of all the teams) 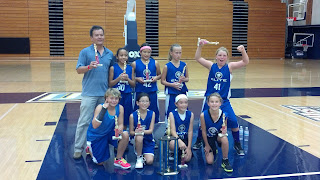 In their first tournament of the season the 5th graders won the championship with wins over the Lady Shakers and two hard fought wins over Oxnard Swoosh.  They did it with great intensity and focus.  All the skills work in practice sure paid off.  Great start! 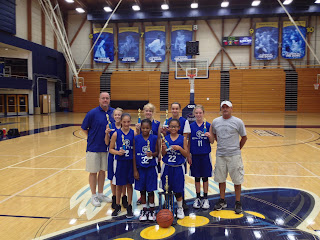 The 6th graders got to play all their games on center court and did not disappoint by winning the championship in impressive fashion.  The team showed everyone in the gym that they are a force to be reckoned with in the 6th grade division this season by posting victories over the Santa Barbara Blazers and 818 Swoosh.  That's two in a row!

Our 7th and 8th grade teams played in the same division in a round robin format.  The 7th graders won one and lost one.  Most importantly, the team chemistry really started to develop.  Pretty amazing for a team with as many new players as they have.  Plus I love the intensity they play with.  Keep working!
The 8th graders won both their games despite missing two players.  The team showed its athleticism and its ability to play at different tempos and against much larger opponents.  Sky is the limit!
Overall the club finished the tournament with 8 wins and 1 loss.  It's a great start but we still have work to do.